Because of the way that books are printed, the Author's Note at the end of Viking Fire got dropped just before publication in favour of the rather lovely map...

But for you, dear reader, I reproduce it here.

By the year 1066, Harald Hardrada’s star dominated the heavens. He was the superstar of his age, not only one of the richest man in Christendom, but also with a proven career as a mercenary commander, having fought and won across the Mediterranean world, from Sicily to Jerusalem, Bulgaria and Asia Minor. He came close to being one of the most extraordinary rulers we ever had, perhaps eclipsing even Richard the Lionheart (currently the most celebrated adventurer king) in scope and achievement. But the Fates being cruel, he’s little more than a footnote to that year, being the first of the three 1066 contenders to be knocked out.

But we must not let hindsight bias lead us into thinking that the man who has often been dubbed ‘The Last Viking’ was leading a final, doomed Viking expedition against England. Of course, no one at the time knew the Viking Age was coming to a close. And rather than being a final gasp, I  would venture that the betting man or woman of Late Anglo Saxon England, forced to pick one of the three contenders for the throne in that year, would have put their money on Harald Hardrada coming out as King of England in the autumn of 1066… (and how that would have changed history). I hope this novel lifts Harald up from the footnotes of history and gives him his due place of honour.

Harald’s impetuous decision, in the summer of 1066, to invade England seems to baffle Snorri Sturluson, the compiler of the sagas, when he was writing a hundred and fifty years later. The motivation he gives for Harald’s decision seems tenuous at best, with Harald claiming to be heir of Edward the Confessor, through a twenty-five year old agreement between his nephew Magnus and Knut’s son, Harthaknut, of Denmark. This bit of Dark Age sophistry has always felt a poor reason for Harald to risk all. I think his reasons were much more personal, and visceral, as laid out in this novel.

Some readers, who have come to this book after Shieldwall might be wondering why this is the second book in the series. This is the tale that best spans the fifty years between 1016 and 1066. I hope that the interconnectedness of the events in Northern Europe become apparent in the reading. The much-forgotten Danish Conquest of England, in 1016 (a thousand years from the publication of this novel) set in train events across the northern world that would lead to 1066. Not only did Knut’s power lift Godwin from obscurity and scatter the heirs of Alfred to the wind, but it also drove Harald’s brother, Saint Olaf, into exile – not once, but twice. And I guess, Knut’s power drove Harald on the Eastern Road.

Harald Sigurdson (his nickname ‘Hardrada’ only being used after his death) is a character about whom we know a surprising amount, considering the time and distance of his life from our own. He’s the subject of part of the Heimskringla Saga, which chronicles the lives of the Norwegian Kings, and his part of it is published by Penguin Classics, as King Harald's Saga. The essential thrust of the story has variations on a theme in Fagrskinna and Morkinskinna. He appears in the Anglo Saxon Chronicle, and he also pops up in a Byzantine text, the Strategikon of Kekaumenos, written in the mid-1070s by an Armenian who knew Harald personally, and wrote about his great service to the Empire.

But historical texts, by necessity, leave out more than they cover. To take the sagas as an example: the writers were working with limited knowledge, more than a century after the events of which they speak, and their point of interest is both much more parochial than our own (as well as being based on and in conversation with a common oral history, which has been lost). This means we often feel as though we’re watching a news report about that time, but that the camera is pointing at the floor. Contemporary chroniclers are famously concerned with the deaths and appointments of abbots and bishops, while the common folk barely warrant a mention, and the private lives and thoughts of characters involved cannot be known.

This skewed focus is apparent in Heimskringla, for example, where the first thirty years of his life gets short shrift. He is in Constantinople by chapter three, back in Norway by chapter nineteen, and the remaining eighty-two chapters deal with his last twenty years in Norway. This novel hopes to redress that focus; to nudge the camera back towards Harald’s formative years, and the years where he grew into formidable manhood.

This novel is of course, imperfect. But so is any history. Much of what a modern novelist, or reader, would like to know about Harald Hardrada has been irrevocably lost. Despite all the historical sources we have, we will never know what he said, thought, felt.

If imagine the sublime vastness of History then we could do well to think of the night sky, where facts are the brief, bright pin-pricks of light. The blackness between them is all the whys, the hows, the thoughts, the passions, the words that were spoken, the events that happened just off from the eye of History.

The historian Richard Fletcher wrote in his excellent book, Bloodfeud (which deals with events that run parallel to these books) that historical facts do not speak for themselves. They have to be ‘coaxed and entreated into utterance. And if they are to speak, however hesitantly, however indistinctly, however obscurely, they have to be scrutinized against a background, a setting, in a context.’ This coaxing is the job of both historians and historical novelists alike, but the results and expectations on both works diverges, each according to their craft.

The historian responds to night sky by making patterns and constellations, and bringing order and understanding to what might appear to be confusing chaos. The historical novelist does something quite different: they fill the darkness with lights of their own devising. It is of course, a fiction, but sometimes Truth is best dressed up in fictional clothes. If you think in archaeological terms, historical fiction is an excavation through imagination. Hopefully, among the dirt, there are a few pot shards and bits of broken comb, and maybe also a hint of gold. 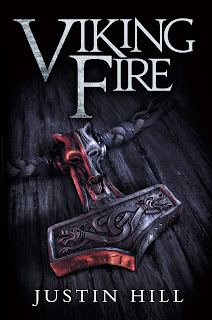 Hi Justin. I live in Cape Town have just read Viking Fire, which I chanced upon after reading a Harry Sidebottom (and deciding not another one of those) and one of Ben Kane's (that worthy rugger bugger.) Scratching around because I have read every Robert Harris and every CJ Sansom and was looking for something on a par with these. I found it in Viking Fire - such brilliant writing; thoughtful and absorbing. A wonderful read. Thank you.

So obviously I will read Shieldwall now.

But I'm posting this to implore you to write more medieval historical novels. Perhaps I'm missing something, but it seems there has been nothing after Viking Fire?